Here is the global production map of the giant groups... 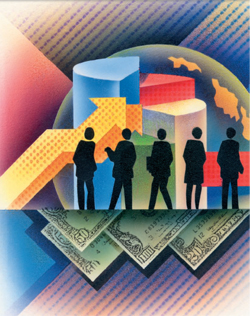 Over the last 10 years there has been a rapid rise in the number of companies from a broad range of sectors, from electronic goods to ceramics, textile retailing and petrochemicals, which have shifted their production abroad. The Turks who have invested in production abroad have done so either by buying existing factories or by building entirely new ones. The factories owned by Turks are spread across a wide area, from Europe to the Caucasus, the Far East and the Pacific.
In which region are they?
The Turkish companies which have gone global in terms of their production are today active in nearly 100 countries on the European, Asian, African, American and Australia continents. Russia and the countries of Central Asia account for a particularly important share of Turkish companies' factory investments. Companies such as Anadolu Efes, Şişecam, Coca-Cola İçecek, Arçelik, Boydak Holding, the Eczacıbaşı Yapı Group, Hayat Kimya, the Kale Group, Okan Holding, Starwood, Vestel and Yıldız Holding produce a significant proportion of their output in Russia and neighboring countries. There are also Turkish factories in African countries. The Turkish companies which have opted for this region include Coca-Cola İçecek again, the Arbel Group, Arçelik, Evyap, Colin's, LC Waikiki and Yıldız Holding. The companies which produce on the American continent include the Arbel Group, Aktaş Holding, Kordsa Global, Sarkuysan and Yıldız Holding. Giants such as the Eczacıbaşı Yapı Group, the Kale Group, Şişecam, Yıldız Holding, Kayalar Kimya, Arçelik, Kordsa Global and Kastamonu Entegre produce in Europe. Those who have taken advantage of lower costs to produce in the Far East include Arçelik again, the Anadolu Group, the Arbel Group, Söktaş, Kordsa Global, Aktaş Holding, Tema Mağazacılık and Yıldız Holding. 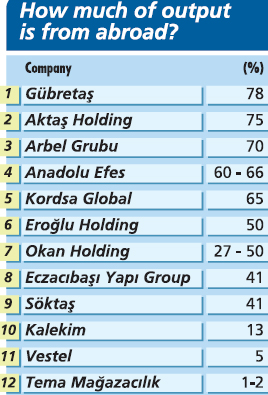 Those who are most widely spread
When we study the global production map for Turkish companies, we see that some companies are distributed throughout virtually the entire world. Kordsa Global produces at factories in Turkey and Germany in the Europe, Middle East and Africa (EMEA) region, Indonesia and Thailand in the Asia Pacific region, the USA in North America and Argentina and Brazil in South America. Aktaş Holding is another of those which has opted to spread throughout the world. Aktaş Holding Board Chair Şahap Aktaş says: "At the moment, our factories are continuing to grow by creating their own markets. They are increasing their market shares by the day. We are the third largest player worldwide in our sector." The Anadolu Group is another which has spread all over the world. It produces beer, malt, aerated and nonaerated drinks at its plants in Russia, Kazakhstan, Moldova, Georgia, Turkmenistan, Azerbaijan, Iraq, Kirghizstan, Pakistan and Jordon.