The target is to double our turnover within four years 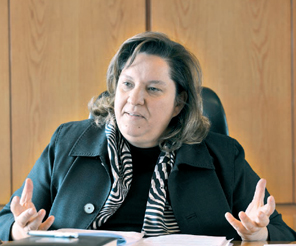 The Kale Group is one of the leading industrial conglomerates in Turkey. For the last four years, this giant group has been headed by Zeynep Bodur Okyay. It is Okyay who has been responsible for the change in the group. Within the context of the existing transformation plan, Okyay has restructured the board of directors, transformed the company's corporate identity and focused on two sectors and she is targeting operational excellence and sustainable profitability. She is ambitious enough to declare: "As a result of this project by 2015we shall double our net turnover, which currently stands at TL 1.2 billion." We spoke with Kale Group Board Chair Zeynep Bodur Okyay about the company's new projects and future targets.

Capital: You took over at Kale during a time of economic crisis and following a very important leader. What difficulties did you face during this period?
- I became chair of the company's board of directors at the time of the 2008 economic crisis. There was a lot of performance-related pressure and stress. It was really very difficult for me. This was the reason we initiated a new project. We have been applying this project for the last four years. We call this the "Building the future on the past" project. In this project, we have focused on questions such as what kind of management approach we should adopt in order to manage our business better, what are the opportunities and how we can grow. Our founder Ibrahim Bodur was one of the most important industrialists produced by this country. When we are in difficulties, it is still his vision that shows us the way forward. We thought that it would be fitting for us to build on the corporate culture that he had created. Starting in the 1990s, globalization has accelerated by the day. Companies began to feel more pressure from globalization. The business community needed to be reshaped accordingly. This is the reason that we initiated this new project.

Capital: You changed the company's corporate identity. Could you talk a little about this?
- We announced that 2008 would be a year of consolidation, recovery and evaluation of the next five years in the light of the crisis. As a result, this was our main strategy until the end of 2012... After 2012 comes the transition to the second phase of our project, the growth strategy. Within the scope of this vision, some new colleagues joined us. I spoke with all the members of the team personally and explained our new project. Everybody needs to embrace this new project wholeheartedly so that we can successfully realize it.

Capital: What were the main outlines of this new strategy to transform Kale?
- In fact, it was a roadmap. We foresaw focusing on certain areas. We decided to focus on the areas in which the Kale Group was strongest, construction materials, construction chemicals and the aviation sector. Aviation is a
sector that we first entered at the beginning of the 1980s. We have been continuing to grow in construction materials and chemicals sector for years. The basis of the project was drawing up a special strategy for each of these two different areas. At the top, we planned to harmonies these strategies. We produced a corporate report card. We developed targets in accordance with this corporate report card.