Signs of a squeeze

Here are the signs coming from the sectors... 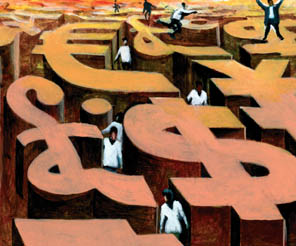 The world entered 2012 with expectations of a recession. In Turkey, business people have begun to use words such as recession, squeeze, and slowdown more frequently in recent months. So is there a crisis or a squeeze in Turkey? Our analysis of 14 I basic sectors suggests that there is no I serious crisis or radical recession. But J the data from different sectors show that in some areas the pace of growth h has slowed. Some are contracting e while others are experiencing a  recession or a squeeze. Here are the signs coming from the sectors...
Click image to see the table

NEGATIVE SIGNS
There are signs of a contraction, a recession or a squeeze coming from most of the basic sectors. One of them is housing. There are signs of a slowdown and a squeeze in brand-name producers in housing sales in particular, Sinpaş GYO Executive Board Chair Omer Faruk Çelik notes that in the first quarter of this year housing sales contracted by 20 percent compared with the previous quarter, Ukra İnşaat CEO Kürşat Tuncel draws attention to the slowdown during the summer months and adds: “When combined with the summer, the expectations of risk outside Turkey have resulted in the slowdown in sales. But purchases will pick up again by the end of the year.”
Business is not going very well in white goods. BSH Türkiye CEO Norbert Klein thinks that 2012 will be an extremely difficult year, BSH forecasts that the market will either contract or stay the same this year. Klein says: “Sales declined by 1 percent during the first four months of this year compared with the same period last year. The market has become very difficult. At the same time production costs arising.”

THE CONTRACTİON HAS STARTED
The signals coming from automotives, which last year broke records with sales of 864,439 vehicles, are negative. During the first five months of this year, the total market contracted by 21 percent and automobile sales by 16.9 percent. Renault Mais General Manager İbrahim Aybar explains that they forecast the downturn during the first three months of the year. Aybar says: “The figures for passenger and light commercial vehicles in March, April and May mean that in the first five months of the year sales fell by 20.8 percent compared with the same period last year.” The logistics sector, which began the first quarter of the year well, has entered a recession. Aslan Uzun, Ceva General Manager for Turkey and the Balkans, says: “In the short term, it does not look as if our exporting customers will be able to establish new export links to compensate for the contraction on European markets. In the end, this will affect Turkey.”

NEGATİVE EXPECTATIONS
The furniture sector began the year with growth. The figures for the first five months do not show a contraction. Boydak Holding Group Marketing Coordinator Bilal Uyanık says that, even though there has not been a contraction during the first five months of the year, there is not enough dynamism on the market for them to realize their goals. Uyanık says: “The serious figures for June and the lack of appetite on the market means that it will be a little difficult to preserve the growth of the first five months.” Another sector in which expectations are negative for the remainder of the year is household textiles. Zorlu Holding Textile Group President Vedat Aydın says: “It is difficult to say that things will get better. Of course, the problems in the EU and the weakening of the euro are unpleasant for us.” Aydın expects there to be a contraction on the domestic market in particular during the second half of the year and for things to go backwards. “If the government is successful in securing the soft landing it is trying to achieve, we think that we shall close the year without too many losses. But, of course, it is difficult to manage a soft landing” forecast Aydın.