During the final months of the year, most companies are racing to realize their targets... 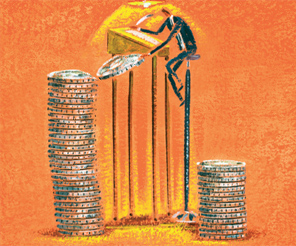 In 2013 this has a rather special meaning... The Gezi Park protests, the decisions taken by the FED, the dollar exchange rate and the fluctuations in interest rates have increased the pressure on many sectors. For this reason, many companies are pinning their hopes on the last two months. Many companies are calculating how to “close the gap”. As a result, in many sectors from clothing to retailing, automotives, information technology and small household appliances, close to 35-40 per cent of sales are done in the final quarter of the year. It is precisely for this reason that companies are doing whatever they can to use these last months well.

IS REVISION WIDESPREAD?
It is companies in white goods, technology, clothing and retailing that are experiencing the greatest difficulties in meeting their year-end targets. Many companies in the small household appliances and white goods sectors, which had been targeting growth of 5-6 per cent this year, have revised their targets. Murat Kolbaşı, the head of Arzum Electrical Household Appliances, says that they have reduced their growth rate from 10 per cent to 8 per cent and that they will try to close the gap by focusing on new products and promotions during the last quarter of the year, when they realize 40 per cent of their sales. “We shall continue our promotional campaigns,” says Kolbaşı. Indesit Company Turkey Country Manager Turgay Dağ says that they are meeting their sales targets but that they have had to revise their Euro-denominated turnover targets.

NEW PRODUCT STRATEGY
The formulae by which companies are trying to close the gap in their targets are headed by increasing productivity, rapid product supply and innovation. The most frequently employed strategy to increase profitability and avoid reflecting the change in the exchange rate on prices is broadening the sales field. “We are growing very cautiously this year, as we did in 2012, in order both to increase our turnover and to improve our profitability rates. We are monitoring our productivity plans very closely without reducing our investments,” says Boyner Group Board Chair Cem Boyner. Sinan Öncel, the owner of the Twigy brand, is one of those who is focusing on new products in order to meet their year-end turnover targets. “While we are trying to meet our year-end targets, instead of raising prices, we have focused on operational productivity, innovation and increasing the sales of our gift products,” says Öncel.

THE SECTORS IN DIFFICULTIES
It looks as though foodstuffs companies will have difficulties meeting their targets. Sezon Pirinç Board Chair Mehmet Erdoğan says that they realize 30 per cent of their turnover in the final quarter of the year and that, in this context, their growth target of 20 per cent is looking difficult. “In November and December we focused on the domestic market as a means of compensating for our losses on the export market,” says Erdoğan, “We developed an aggressive growth policy for the domestic market. We had a growth target of 20 per cent for this year.

Unfortunately, we have not achieved the desired target. But we predict that things will pick up in the final part of the year and that we shall reach our year-end target.” Güneş Karababa, Barilla Director for Turkey, the Middle East and Africa Region, says that they will emphasize marketing and communications in order to meet their year-end targets.

GOOD AND BAD SCENARIOS
The movements in the exchange rate have resulted in a decline in sales in automotives. Members of the automotive sector are targeting increasing sales through campaignsand new products in the final quarter of the year. Peugeot Otomotiv Marketing General Manager Marc Bergeretti says that in September the total market contracted by 2.4 per cent when compared with the same

month the previous year, which was the first time that there had been a year-on-year decrease since the beginning of 2013. “But we still predict that the automotive market will be larger this year than in 2012 and that the total market will close 2013 with sales of 800,000 to 820,000 vehicles,” says Bergeretti, Doğuş Otomotiv Executive Board Chair Ali Bilaloğlu says that they have achieved their nine-month targets but that the last quarter of the year will be more difficult. “In the last part of the year, consumers’ decisions to buy cars may be affected by the FED’s interventions, the movement in the exchange rate and higher interest rates when compared with the first half of the year,” says Bilaloğlu.

THE SECTORS THAT WILL PICK UP
One of the sectors that suffered a disappointment during the summer was private pensions. Avivasa CEO Meral Eredenk says that the sector had been targeting total funds of TL 27 billion by the end of the year and that her company is focusing on customers, promotions, new products and alternative distribution channels in order to meet its own targets. Erdenk said that, assisted by the state, they would continue to provide the relevant customers with information. She summarized what they would do in the future as follows: “We are working on retaining and developing customers are priority areas. For this reason, we are continually investing in technology to increase productivity and customer satisfaction. We have established gold funds and added them to our plans for our customers who want to earn revenue from different investment instruments. In addition, we are continuing to grow our direct sales channels.”