Not a hobby I'm serious

We have recently see Doğuş Holding go on the offensive in sports, fashion and the entertainment business. 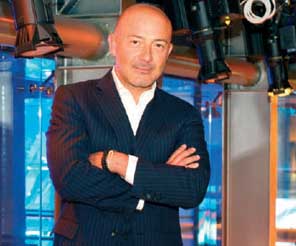 FERİT SAHENK is the board chair of Doğuş Holding, whose turnover of $5.257 billion makes it one of the largest groups in Turkey. He is one of the most powerful members of the business community. For this reason his agenda has great significance and what he does is closely followed. He has important targets in the restaurant, entertainment, sports and e-commerce businesses Doğuş has entered. It is making progress towards becoming a regional power in its existing businesses. Sahenk has some very ambitious goals for the future, stating: “We want to be among the first three in every area where we are active.” We spoke with Sahenk about the new businesses the group has entered, his targets for the businesses Sahenk is already in and his own agenda.


Capital: How ambitious are you in these fields?
Turkey has a population of 75 million. We reckon 50 percent of them are under the age of 30. Now Turkey wants to host global sports events such as the Olympics and the European Championships. When doing this, one should also give importance to Turkish sports. In this context, we have plans to open a sports academy together with IMG. Of course, in order to host the Olympics and World Cups, you also need people who can run such things well, stadiums and infrastructure to serve the stadiums. We want to move forward with IMG, which is a global giant in this field. We have established a 5050 partnership.

Capital: Why did you decide to enter this new field?
- There is a marketing philosophy which says “differentiate or die”. In fact, this is called the “entertainment economy”. We began to lean towards this area in 1998. Then came the crisis and we underwent a period of recovery. The restaurant business we have recently entered and the cooperation with IMG are a follow through from our original intention.

Capital: What exactly are you planning to do in sports?
- We are looking to manage the changing and developing stadiums in Turkey. We want to hold tournaments in which globally-known sportspeople and teams compete. We are looking at the sponsorship, organization, ticket sales and TV broadcasting for these. We are planning to conduct branding for these businesses and sell them abroad.